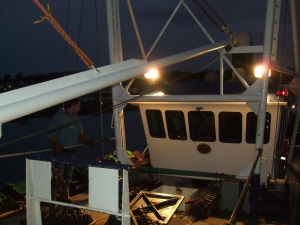 Scallop fisheries are acknowledged to be amongst the most potentially disturbing forms of fishing currently occurring in British waters.  If carried out over sensitive habitats scallop dredging may cause irrevocable damage to the seabed, a situation which the Welsh Fishermen’s Association (WFA) is working hard to prevent.

The economic realities are that scallops, driven by public demand over the whole of Europe, are a valuable catch (3rd most valuable commercial species landed by UK vessels into the UK with first sale landing worth £54.5M in 2010) and a vital part of the economies of many UK coastal communities where they support fishing vessels and crews, transport firms, processing companies and of course fishmongers and restaurants.

The Welsh scallop fishery hit the headlines in 2009 after an influx of fishing vessels to the rich scallop beds in Cardigan Bay.  These vessels from around the UK, including fishermen displaced from their traditional grounds in Lyme Bay, arrived in large numbers raising concerns on their impact on the fishery and on protected sites such as the Cardigan Bay Special Area of Conservation.

Since 2009 the WFA has been central to developing a Welsh Waters Scallop Strategy in partnership with the Welsh Government, Seafish, Universities and conservation bodies, the aim of which is  to secure a long term sustainable scallop fishery in Wales that maximises socio-economic return whilst respecting the marine environment and other fisheries.

Co-management approaches such as this, where fishermen work in partnership with managers and scientists, are considered by many as the best practice approach to developing effective fisheries and conservation management.

The central themes of the developing Welsh Waters Scallop Strategy are:

Welsh scallop fishermen are also working closely with scientists and fishing gear technicians from Seafish to develop low impact and efficient scallop gears that will reduce seabed disturbance.  Attention is often given by celebrity chefs and the media to alternative approaches to scallop dredging such as diving.  Although divers land high quality scallops they are a niche market, the reality is that diving is never going to meet wider market demand and support the coastal economy so we need to work hard in many areas to find ways of maintaining a successful and sustainable fishery that does not have unacceptable environmental impacts.